Sandbox Theatre Expands to Greenwich After Ten Years in Westchester

When our children show an interest in an activity, our natural inclination is to encourage it, in the hopes that this activity—be it dance, theater or sport—will lead to opportunity for them in the future. This is not a bad thing; it comes from a hopeful place inside us, the place that wants to see our children do better than we did. However, sometimes transforming a child’s curiosity into a career-minded goal that must be realized at all costs robs the child of the joy the activity held for him or her in the first place. The Sandbox Theatre recognizes this, and has championed a creative acting program for kids, producing plays that encourage expression through performance without the pressure of career building above all.

New to Greenwich, the award-winning Sandbox Theatre spent the previous decade in Westchester, thrilling the community with a variety of shows that featured performers of all ages. Just as the Sandbox Theatre built a loyal following in Westchester, now they look to do the same for the community of Greenwich by providing opportunities for youngsters that center around the joy of performing itself. Unlike many other theater companies whose sole focus is using their workshops and performances as a stepping stone toward Broadway or the Silver Screen, the Sandbox Theatre strives to create a safe and nurturing environment for children and young adults who want to perform on stage. The Sandbox Theatre’s friendly, supportive staff treats every child with genuine warmth, demonstrating a desire to see each youngster build confidence and enjoy the wonderful benefits inherent to performing. 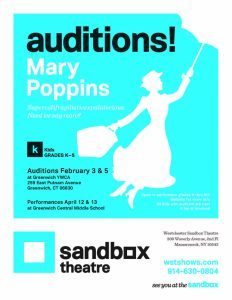 This upcoming spring, the Sandbox Theatre is proud to present Mary Poppins Jr. as the inaugural play of their Greenwich chapter. With Mary Poppins returning to the movies this holiday season, children from a whole new generation will experience the wonderful characters and magical storyline of this timeless classic. With the Sandbox Theatre presenting a theatrical version inspired by the movie, kids fascinated by Mary Poppins will get to participate in the story themselves. 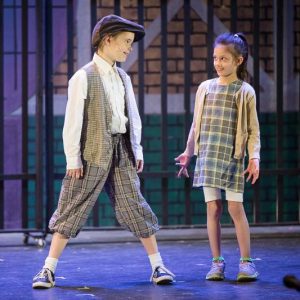 The play will be open to all children between kindergarten and 5th grade who audition. “Audition” is a scary word to most young children, but youngsters who may be hesitant to audition for a play need not worry. The Sandbox Theatre makes the experience as comfortable and supportive as possible. Each audition is a one-on-one meeting with a member of the theater’s friendly staff. The child will be asked to sing a song and read a few lines from the script. The whole experience is designed as a low-key way for the staff to get to know the child so they can properly cast the child in a role best suited for their level of acumen. Parents don’t need to worry about their child feeling rejected or turned down. Inclusivity is key at the Sandbox Theatre; each and every child that auditions to perform in the play will be given a chance to do so, often resulting in multiple casts. 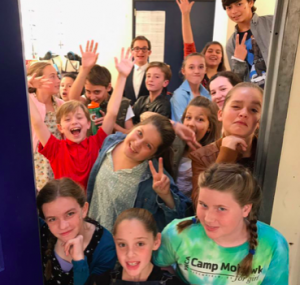 At the Sandbox Theatre they strive to put the experience of the child first. They recognize the Greenwich area is filled with competitive programs for young actors. And while the Sandbox Theatre’s productions do offer a chance for a child to be seen, they are more interested in nurturing the self-confidence and creative courage in a child than in using their plays as stepping-stones for agent showcasing and other industry-minded endeavors. The overarching goal of The Sandbox Theatre’s production of Mary Poppins Jr. is to give both the children and the audience a rewarding performing arts experience.

The Sandbox Theatre staff takes into consideration the schedules of the parents and the children when deciding upon rehearsal days. Once these schedule accommodations are made, parents can expect their children to be involved two to three times a week, building up to a more rigorous schedule the final week and half before the production opens.