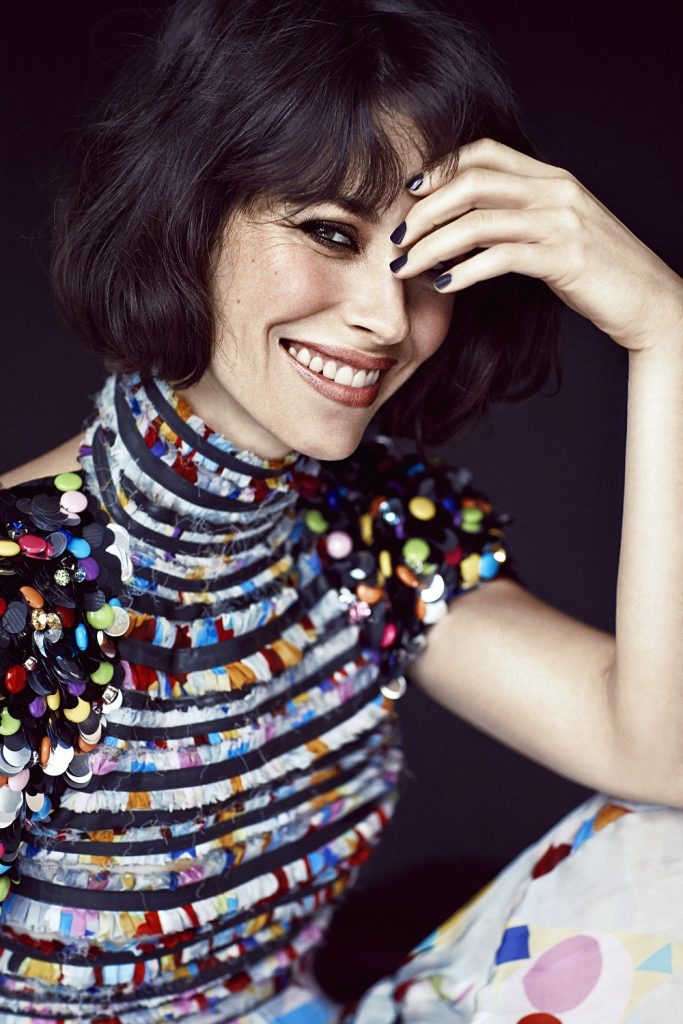 We love a mama who thinks and acts outside the box, and that’s a category Evangeline Lilly fits squarely in. You may know her as the effervescently beautiful star of the cult favorite television series Lost, for which she was nominated for a Golden Globe. Currently, she’s appearing on the big screen in both Antman and Wasp and The Avengers. But then she’s also done a lot of things outside of acting that you wouldn’t expect a Hollywood A-lister to do….like base herself in Hawaii instead of LA. And write a children’s book series called The Squickerwonkers that’s a surprisingly dark yet playful group of cautionary tales that will engage reluctant readers.

We spoke to the mom of two (her sons are 7 and 2) about her own mother’s influence on her choices, why she’s not making any big career moves while her kids are small, and more.

I’ve read that you were an unenthusiastic reader as a kid until you found Edward Gorey. I actually have an Edward Gorey book called The Dwindling Party from my own childhood, and read it to my 2-year-old recently and was surprised to realize, well, everyone dies…The story and illustrations are amazing…but I definitely didn’t remember how morbid it was!
Ha, yes! I wasn’t a terrible reader when I was little, just slow, and Edward Gorey was the first author I read who had five or six words on a page, who’s books were digestible, but who was addressing sophisticated and adult topics…and I loved it! Books designed for my age group at that time (around 8-years-old) would take me too long to read; if it took someone else a week it would take me two months. That was frustrating. There was the option of reading easier books but the subject matter was so childish it was insulting. I was aggravated—I thought, I’m not stupid because I’m not a fast reader. I think that he was an adult who was willing to talk to me about heavy things that no one talks to kids about…he always let me in on everything. I could feel the respect in that.

Why write for this age, around eight years old?
This is the age when they’re starting to choose their own books. For kids that aren’t voracious readers…when you connect to literature for the first time, that makes your soul sing. You’re recognizing your soul out in the world—it’s a very profound thing. It’s the most exciting for me to write for them because they’re moving out of their emotional space and into their mental, intellectual space. But they’re still able to access magic, fantasy and imagination—to fall into a story and believe it’s real.

Was becoming a mom a catalyst for writing the series?
It was literally cause and effect. I had my first child and in the first year of his life I started to create the series, got an illustrator, and made plans for self-publishing. But these books were in the making since I was 14-years-old. I remember reading the first one to my mom. Moms are amazing. She kept pestering me for years and years, saying what are you doing with that Squickerwonkers book? When I finally decided to take the leap to becoming a published author that was the first thing I started with.

Moms are a force, for sure! I noticed the series has a circular nature…will fans of Lost see a similarity?!
Ha, definitely! For years I would think, Why do I always find myself in this sci fi genre? As a film consumer and reader my taste is not in that genre. I like really grounded material so I was always confused by how I always ended up [here].  But I realized I’ve actually been drawn to fantasy since I was little. I was so into Tolkien, and obsessed with unicorns and fairies. There are wonderful elements for people who want to dive deeper like a Lost fan would!

Awesome, because I know some people are still sad about the end of that show! Switching to movies…in Antman and Wasp, you’re the first female main character in recent history in a Marvel film. How important is this?
Ironically for me, it has become slightly more difficult for me to talk about since Times Up/Me Too. I think the topic has become so polarizing for some people. The thing that is most important to me as a women who cares deeply about the rights of little girls and women and believes human beings are equal, is that for me that’s not female power—that’s men and women walking hand and hand side by side. I always try to bring that balance to my writing or acting. That’s the power of equality. 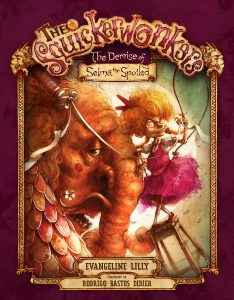 What other messages are you interested in sending, as an actress and as a writer?
One of the main goals in writing Squickerwonkers is to say, You are flawed but so am I. We’re all a great big mess but that doesn’t make you less loveable. There are ten protagonists in my stories and all ten of them are a red hot mess. But what can’t be lost in our modern approach to parenting is what tends to get lost—cautionary tales for modern day brats. We can love one another despite our faults and also teach our children how their choices will result in consequences. And teaching them about good and bad choices is so very important. We’re all flawed—even moms! It makes us human.

Living in Hawaii, I’m guessing you fly pretty often. Any tips on flights with kids?
I do travel often with my kids. When they were super little I used to always tell moms that if you’re breastfeeding, the number one tip is it doesn’t matter if hell or highwater, save your feed for the ascent and descent because it will help the ear pressure! I have been on a plane with a baby crying for two hours solid, and it was a red eye and I locked myself in the bathroom for two hours. I figured it was the kindest thing I could do at the time. When we landed, he was still distraught and we didn’t know what to do, and I got this great piece of advice from an airline employee who said that usually keep an oxygen mask that can steam the babies nose and sinuses.

Great tips! Do you always bring the kids with you when you travel for work?
Almost always.  I have a strict policy that if they aren’t able to come with me I won’t do [a job] unless it’s very short. I’ve questioned my line of work period…I have an 8-year-old and he’s in an immersion school and learning a second language.

What does writing give you that acting doesn’t?
Writing plays more on my imagination and my intelligence, and that’s a greater strength for me as a person. But as a mom with young kids, it’s a hard time to be developing a new career. A few years ago I said, I’m making the break and doing the writing thing and keeping my day job…and with those two and my activism and humanitarian work, I wasn’t seeing my kids as much as I’d  like. My kids are only going to be this age for a little while longer, and in five or so years they’re going to want nothing more to do with their mom—and that might be the time to dive in and say, This is what I’m going to do with my life. Until then, my attitude is just to go with what comes…I’m just going to ride this wave.

For interviews with other inspiring moms, including Kristin Cavallari, Denise Richards, Ali Fedotowsky-Manno and Laura Prepon, go to our Profiles section!

This post first appeared on The Local Moms Network.